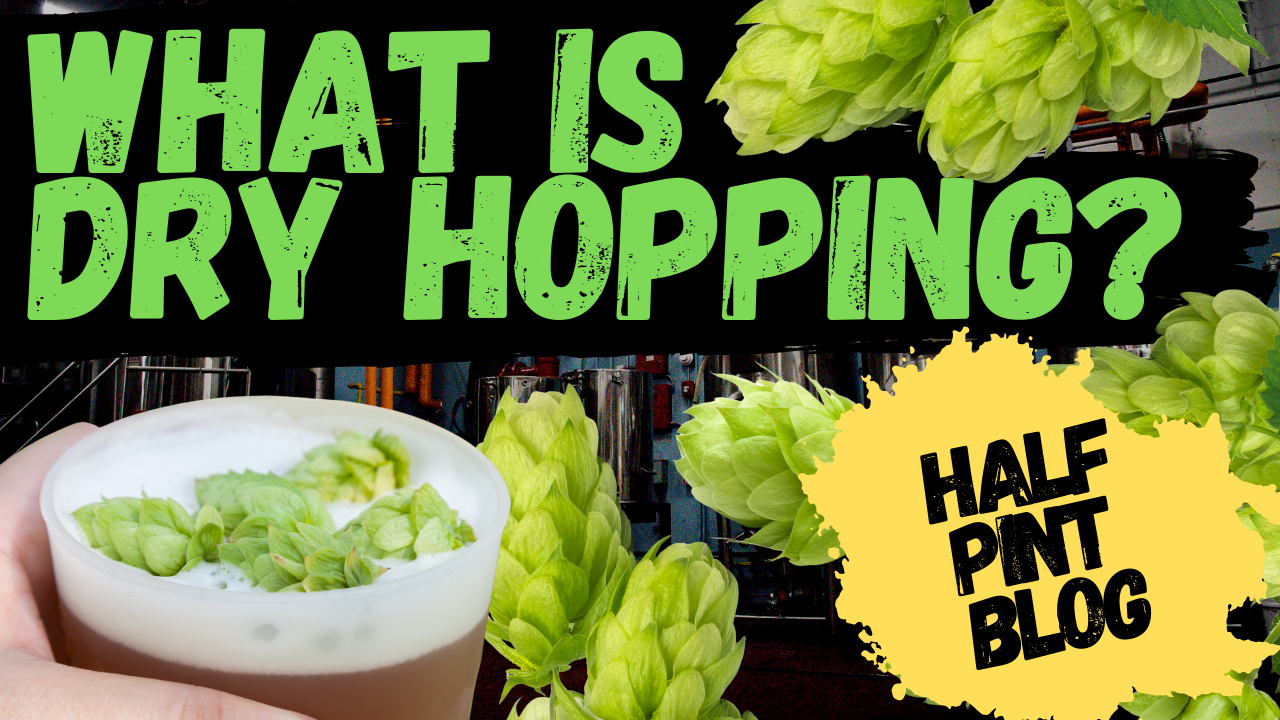 HALF PINT: What is Dry Hopping?

Welcome back to another HALF PINT BLOG POST! A short post you can enjoy whilst supping at a half pint... Today we are looking at dry hopping.

Dry Hopped, DOUBLE Dry Hopped, DDH, X number of grams per litre and pounds per barrel: These are terms you'll often see on can and bottle labels, and commonly associated with IPA and other hop-forward beers. But what does it mean?

Dry hopping refers to hops added to the beer near the end. Historically this was done in the wooden barrels before the beer was aged, but these days it's mostly done in the fermentation vessel once the yeast has finished doing its job, or just before.

Sometimes it refers to the use of a hop rocket, or other similar closed loop hop-dosing system.

The technique of dry hopping is responsible for those amazing big aromas of tropical fruit, dank sticky resin, pine, and a myriad of other awesome characteristics you'll find in those big IPAs!

A lot of the delicate oils that are responsible for these flavours and aromas are evaporated and lost during the hot side of brewing, and again during fermentation, so by dry hopping, brewers are adding those oils back into the beer. Alcohol is the perfect solvent for these oils, which is why you can get bigger bolder aromas and flavours from double IPAs compared to lower abv beers.

IPA brewers of the craft beer revolution have constantly pushed their hop IPA usage to the max. During the the 00s it was increase of bitterness and IBUs, and now with the rise of hazy beers it's the amount of 'juice' that can be squeezed into a beer. Just like the previous IBU arms race, craft brewers have been boasting how many times they've dry hopped their latest IPA, and the amount of grams per litre they've packed into the fermentation vessel.

As breweries have matured, as well as the understanding of hop science, a lot of American craft brewers have calmed down on their g/l sales pitch, as many have realised that sometimes more is not always more. In the UK (at the time of writing!), breweries haven't quite caught up, and you'll still see people using this as their sales pitch for their latest hazy creation.

DDH - or Double Dry Hopping - can mean different things to different brewers. It can either mean twice as many hops were used in the dry hop, or it can mean dry hopping the beer at two different times.

There is a lot of hop science on biotransformation, which is dry hopping on active yeast (rather than dry hopping when the beer has finished fermenting), that can alter the aroma of finished beer for the better. A second charge is usually added once the yeast has dropped out.

Even though a lot of brewers disagree on hopping ratios, types, lengths etc, all good IPAs contain great hops in the dry hop. Yum!

What are IBUs? (In under 30 seconds) #beer #shorts #beerlesson - YouTube